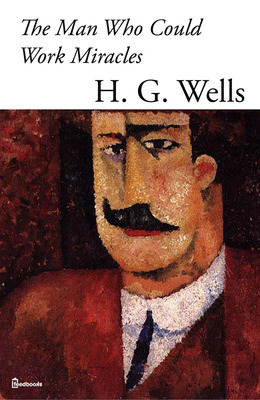 The Man Who Could Work Miracles


There was possibly a certain want of originality in his attempts, for, apart from his will-power, Mr. Fotheringay was not a very exceptional man. The miracle of Moses' rod came to his mind, but the night was dark and unfavourable to the proper control of large miraculous snakes. Then he recollected the story of "Tannhauser" that he had read on the back of the Philharmonic programme. That seemed to him singularly attractive and harmless. He stuck his walking-stick - a very nice Poona-Penang lawyer - into the turf that edged the footpath, and commanded the dry wood to blossom. The air was immediately full of the scent of roses, and by means of a match he saw for himself that this beautiful miracle was indeed accomplished. His satisfaction was ended by advancing footsteps. Afraid of a premature discovery of his powers, he addressed the blossoming stick hastily: "Go back." What he meant was "Change back;" but of course he was confused. The stick receded at a considerable velocity, and incontinently came a cry of anger and a bad word from the approaching person. "Who are you throwing brambles at, you fool?" cried a voice. "That got me on the shin."

"I'm sorry, old chap," said Mr. Fotheringay, and then, realising the awkward nature of the explanation, caught nervously at his moustache. He saw Winch, one of the three Immering constables, advancing.

"What d'yer mean by it?" asked the constable. "Hullo! it's you, is it? The gent that broke the lamp at the Long Dragon!"

"I don't mean anything by it," said Mr. Fotheringay. "Nothing at all."

"Bother indeed! D'yer know that stick hurt? What d'yer do it for, eh?"

For the moment Mr. Fotheringay could not think what he had done it for. His silence seemed to irritate Mr. Winch. "You've been assaulting the police, young man, this time. That's what you done."

He could think of no way but the truth. "I was working a miracle." He tried to speak in an off-hand way, but try as he would he couldn't.

"Working a - ! 'Ere, don't you talk rot. Working a miracle, indeed! Miracle! Well, that's downright funny! Why, you's the chap that don't believe in miracles.. Fact is, this is another of your silly conjuring tricks - that's what this is. Now, I tell you - "

But Mr. Fotheringay never heard what Mr. Winch was going to tell him. He realised he had given himself away, flung his valuable secret to all the winds of heaven. A violent gust of irritation swept him to action. He turned on the constable swiftly and fiercely. "Here," he said, "I've had enough of this, I have! I'll show you a silly conjuring trick, I will! Go to Hades! Go, now!"

Mr. Fotheringay performed no more miracles that night, nor did he trouble to see what had become of his flowering stick. He returned to the town, scared and very quiet, and went to his bedroom. "Lord!" he said, "it's a powerful gift - an extremely powerful gift. I didn't hardly mean as much as that. Not really.. I wonder what Hades is like!"

He sat on the bed taking off his boots. Struck by a happy thought he transferred the constable to San Francisco, and without any more interference with normal causation went soberly to bed. In the night he dreamt of the anger of Winch.

The next day Mr. Fotheringay heard two interesting items of news. Someone had planted a most beautiful climbing rose against the elder Mr. Gomshott's private house in the Lullaborough Road, and the river as far as Rawling's Mill was to be dragged for Constable Winch.

Mr. Fotheringay was abstracted and thoughtful all that day, and performed no miracles except certain provisions for Winch, and the miracle of completing his day's work with punctual perfection in spite of all the bee-swarm of thoughts that hummed through his mind. And the extraordinary abstraction and meekness of his manner was remarked by several people, and made a matter for jesting. For the most part he was thinking of Winch.

On Sunday evening he went to chapel, and oddly enough, Mr. Maydig, who took a certain interest in occult matters, preached about "things that are not lawful." Mr. Fotheringay was not a regular chapelgoer, but the system of assertive scepticism, to which I have already alluded, was now very much shaken. The tenor of the sermon threw an entirely new light on these novel gifts, and he suddenly decided to consult Mr. Maydig immediately after the service. So soon as that was determined, he found himself wondering why he had not done so before.

Mr. Maydig, a lean, excitable man with quite remarkably long wrists and neck, was gratified at a request for a private conversation from a young man whose carelessness in religious matters was a subject for general remark in the town. After a few necessary delays, he conducted him to the study of the manse, which was contiguous to the chapel, seated him comfortably, and, standing in front of a cheerful fire - his legs threw a Rhodian arch of shadow on the opposite wall - requested Mr. Fotheringay to state his business.

At first Mr. Fotheringay was a little abashed, and found some difficulty in opening the matter. "You will scarcely believe me, Mr. Maydig, I am afraid" - and so forth for some time. He tried a question at last, and asked Mr. Maydig his opinion of miracles.

Mr. Maydig was still saying "Well" in an extremely judicial tone, when Mr. Fotheringay interrupted again: "You don't believe, I suppose, that some common sort of person - like myself, for instance - as it might be sitting here now, might have some sort of twist inside him that made him able to do things by his will."

"It's possible," said Mr. Maydig. "Something of the sort, perhaps, is possible."

"If I might make free with something here, I think I might show you by a sort of experiment," said Mr. Fotheringay. "Now, take that tobacco-jar on the table, for instance. What I want to know is whether what I am going to do with it is a miracle or not. Just half a minute, Mr. Maydig, please."

He knitted his brows, pointed to the tobacco-jar and said: "Be a bowl of vi'lets."

The tobacco-jar did as it was ordered.

Mr. Maydig started violently at the change, and stood looking from the thaumaturgist to the bowl of flowers. He said nothing. Presently he ventured to lean over the table and smell the violets; they were fresh-picked and very fine ones. Then he stared at Mr. Fotheringay again.

Mr. Fotheringay pulled his moustache. "Just told it - and there you are. Is that a miracle, or is it black art, or what is it? And what do you think's the matter with me? That's what I want to ask."

"It's a most extraordinary occurrence."

"And this day last week I knew no more that I could do things like that than you did. It came quite sudden. It's something odd about my will, I suppose, and that's as far as I can see."

"Is that - the only thing. Could you do other things besides that?"

"Lord, yes!" said Mr. Fotheringay. "Just anything." He thought, and suddenly recalled a conjuring entertainment he had seen. "Here!" he pointed, "change into a bowl of fish - no, not that - change into a glass bowl full of water with goldfish swimming in it. That's better! You see that, Mr. Maydig?"

"It's astonishing. It's incredible. You are either a most extraordinary.. But no - - "

"I could change it into anything," said Mr. Fotheringay. "Just anything. Here! be a pigeon, will you?"

In another moment a blue pigeon was fluttering round the room and making Mr. Maydig duck every time it came near him. "Stop there, will you?" said Mr. Fotheringay; and the pigeon hung motionless in the air. "I could change it back to a bowl of flowers," he said, and after replacing the pigeon on the table worked that miracle. "I expect you will want your pipe in a bit," he said, and restored the tobacco-jar.

Mr. Maydig had followed all these later changes in a sort of ejaculatory silence. He stared at Mr. Fotheringay and in a very gingerly manner picked up the tobacco-jar, examined it, replaced it on the table. "Well!" was the only expression of his feelings.