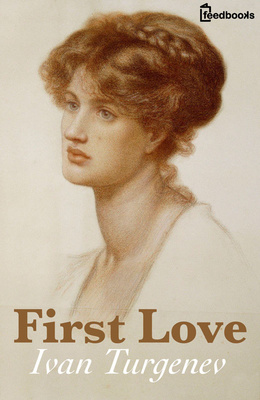 
Context: Narrated by Vladimir, a 16-year old. Last evening, he visited their new neighbor - Princess Zayeskin - and got infatuated by her daughter, Zinaida, a 21-year old.

On the evening of the same day the usual guests were assembled at the Zasyekins'. I was among them.

The conversation turned on Meidanov's poem. Zinaida expressed genuine admiration of it. 'But do you know what?' she said to him. 'If I were a poet, I would choose quite different subjects. Perhaps it's all nonsense, but strange ideas sometimes come into my head, especially when I'm not asleep in the early morning, when the sky begins to turn rosy and grey both at once. I would, for instance .. You won't laugh at me?'

'I would describe,' she went on, folding her arms across her bosom and looking away, 'a whole company of young girls at night in a great boat, on a silent river. The moon is shining, and they are all in white, and wearing garlands of white flowers, and singing, you know, something in the nature of a hymn.'

'I see - I see; go on,' Meidanov commented with dreamy significance.

'All of a sudden, loud clamour, laughter, torches, tambourines on the bank.. . It's a troop of Bacchantes dancing with songs and cries. It's your business to make a picture of it, Mr. Poet;.. only I should like the torches to be red and to smoke a great deal, and the Bacchantes' eyes to gleam under their wreaths, and the wreaths to be dusky. Don't forget the tiger-skins, too, and goblets and gold - lots of gold.. .'

'Where ought the gold to be?' asked Meidanov, tossing back his sleek hair and distending his nostrils.

'Where? on their shoulders and arms and legs - everywhere. They say in ancient times women wore gold rings on their ankles. The Bacchantes call the girls in the boat to them. The girls have ceased singing their hymn - they cannot go on with it, but they do not stir, the river carries them to the bank. And suddenly one of them slowly rises.. . This you must describe nicely: how she slowly gets up in the moonlight, and how her companions are afraid.. . She steps over the edge of the boat, the Bacchantes surround her, whirl her away into night and darkness.. . Here put in smoke in clouds and everything in confusion. There is nothing but the sound of their shrill cry, and her wreath left lying on the bank.'

'And is that all?' asked Meidanov.

'That can't be the subject of a whole poem,' he observed pompously, 'but I will make use of your idea for a lyrical fragment.'

'In the romantic style?' queried Malevsky.

'Of course, in the romantic style - Byronic.'

'Hugo is a writer of the first class,' replied Meidanov; 'and my friend, Tonkosheev, in his Spanish romance, El Trovador .. '

'Ah! is that the book with the question-marks turned upside down?' Zinaida interrupted.

'Yes. That's the custom with the Spanish. I was about to observe that Tonkosheev .. '

'Come! you're going to argue about classicism and romanticism again,' Zinaida interrupted him a second time.' We'd much better play ..

'No, forfeits are a bore; at comparisons.' (This game Zinaida had invented herself. Some object was mentioned, every one tried to compare it with something, and the one who chose the best comparison got a prize.)

She went up to the window. The sun was just setting; high up in the sky were large red clouds.

'What are those clouds like?' questioned Zinaida; and without waiting for our answer, she said, 'I think they are like the purple sails on the golden ship of Cleopatra, when she sailed to meet Antony. Do you remember, Meidanov, you were telling me about it not long ago?'

All of us, like Polonius in Hamlet, opined that the clouds recalled nothing so much as those sails, and that not one of us could discover a better comparison.

'And how old was Antony then?' inquired Zinaida.

'Yes, a young man,' Meidanov chimed in in confirmation.

'Excuse me,' cried Lushin, 'he was over forty.'

'Over forty,' repeated Zinaida, giving him a rapid glance.. .

I soon went home. 'She is in love,' my lips unconsciously repeated.. . 'But with whom?'

First Love is one of the most popular pieces of short fiction. It tells the love story between a 21-year-old girl and a 16-year-old boy. The book is set in Russia in the mid 1800s.

Snippet from Birds of a Lesser Paradise