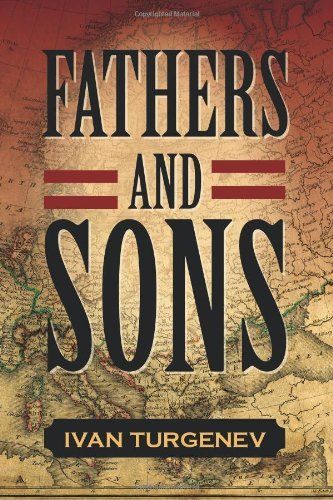 Context: This snippet explores the ideological gap between successive generations in 19th century Russia. Brothers Nikolai and Pavel Petrovitch struggle to stay up with the times as they feel a disconnect with Nikolai’s son Arkandy and his friend Bazarov who is a nihilist.

Arkady graduated from the University of Petersburg and returned with a friend, Bazarov, to his father's modest estate in an outlying province of Russia. His father, Nikolai, gladly received the two young men at his estate, called Maryino.

It soon became clear that Bazarov was a nihilist. If it was to be believed, these nihilists rejected all authority and even resorted to violence to bring about political change.

Nikolai, in the years when Arkandy was at the University, had taken a servant, Fenitchka, into his house to live with him and had already had a son by her, named Mitya. Arkady, however, seemed to not be troubled by the relationship: to the contrary, he openly celebrated the addition of a younger brother.

About a fortnight passed by. Life at Maryino went on its accustomed course, while Arkady was lazy and enjoyed himself, Bazarov worked. Every one in the house had grown used to him, to his careless manners, and his curt and abrupt speeches. Fenitchka, in particular, was so far at home with him that one night she sent to wake him up; Mitya had had convulsions; and he had gone, and, half joking, half-yawning as usual, he stayed two hours with her and relieved the child. On the other hand Pavel Petrovitch, Nikolai's brother, had grown to detest Bazarov with all the strength of his soul; he regarded him as stuck-up, impudent, cynical, and vulgar; he suspected that Bazarov had no respect for him, that he had all but a contempt for him!

Nikolai Petrovitch was rather afraid of the young 'nihilist,' and was doubtful whether his influence over Arkady was for the good; but he was glad to listen to him, and was glad to be present at his scientific and chemical experiments. Bazarov had brought with him a microscope, and busied himself for hours together with it. The servants, too, took to him, though he made fun of them; they felt, all the same, that he was one of themselves, not a master. Dunyasha was always ready to giggle with him, and used to cast significant and stealthy glances at him when she skipped by like a rabbit; Piotr, a man vain and stupid to the last degree, for ever wearing an affected frown on his brow, a man whose whole merit consisted in the fact that he looked civil, could spell out a page of reading, and was diligent in brushing his coat—even he smirked and brightened up directly if Bazarov paid him any attention; the boys on the farm simply ran after the 'doctor' like puppies. The old man Prokofitch was the only one who did not like him; he handed him the dishes at table with a surly face, called him a 'butcher' and 'an upstart,' and declared that with his great whiskers he looked like a pig in a stye. Prokofitch in his own way was quite as much of an aristocrat as Pavel Petrovitch.

The best days of the year had come—the first days of June. The weather kept splendidly fine; in the distance, it is true, the cholera was threatening, but the inhabitants of that province had had time to get used to its visits. Bazarov used to get up very early and go out for two or three miles, not for a walk—he couldn't bear walking without an object—but to collect specimens of plants and insects. Sometimes he took Arkady with him.

On the way home an argument usually sprang up, and Arkady was usually vanquished in it, though he said more than his companion.

One day they had lingered rather late; Nikolai Petrovitch went to meet them in the garden, and as he reached the arbour he suddenly heard the quick steps and voices of the two young men. They were walking on the other side of the arbour, and could not see him.

'Your father's a nice chap,' said Bazarov, 'but he's behind the times; his day is done.'

The man whose day was done remained motionless for two minutes, and stole slowly home.

'The day before yesterday I saw him reading Pushkin,' Bazarov was continuing meanwhile. 'Explain to him, please, that that's no earthly use. He's not a boy, you know; it's time to throw up that rubbish. And what an idea to be a romantic at this time of day! Give him something sensible to read.'

'What ought I to give him?' asked Arkady.

'Oh, I think Büchner's Force and Matter to begin with.'

'I think so too,' observed Arkady approving, 'Force and Matter is written in popular language....'

'So it seems,' Nikolai Petrovitch said the same day after dinner to his brother, as he sat in his study, 'you and I are behind the times, our day's over. Well, well. Perhaps Bazarov is right; but one thing I confess, makes me feel sore; I did so hope, precisely now, to get on to such close intimate terms with Arkady, and it turns out I'm left behind, and he has gone forward, and we can't understand one another.'

'How has he gone forward? And in what way is he so superior to us already?' cried Pavel Petrovitch impatiently. 'It's that high and mighty gentleman, that nihilist, who's knocked all that into his head. I hate that doctor fellow; in my opinion, he's simply a quack; I'm convinced, for all his tadpoles, he's not got very far even in medicine.'

'No, brother, you mustn't say that; Bazarov is clever, and knows his subject.'

'And his conceit's something revolting,' Pavel Petrovitch broke in again.

'Yes,' observed Nikolai Petrovitch, 'he is conceited. But there's no doing without that, it seems; only that's what I did not take into account. I thought I was doing everything to keep up with the times; I have started a model farm; I have done well by the peasants, so that I am positively called a "Red Radical" all over the province; I read, I study, I try in every way to keep abreast with the requirements of the day—and they say my day's over. And, brother, I begin to think that it is.'

'I'll tell you why. This morning I was sitting reading Pushkin.... I remember, it happened to be The Gipsies ... all of a sudden Arkady came up to me, and, without speaking, with such a kindly compassion on his face, as gently as if I were a baby, took the book away from me, and laid another before me—a German book ... smiled, and went away, carrying Pushkin off with him.'

'Upon my word! What book did he give you?'

And Nikolai Petrovitch pulled the famous book of Büchner, in the ninth edition, out of his coat-tail pocket.

Pavel Petrovitch turned it over in his hands. 'Hm!' he growled. 'Arkady Nikolaevitch is taking your education in hand. Well, did you try reading it?'

'Oh, I understand the language alright.'

'From what I gather the book says that the world only has natural elements and natural forces. Saying that everything in the world needs an explanation and anything that cannot be explained does not exist. Either I'm stupid, or it's all—nonsense. I must be stupid, I suppose.'

Pavel Petrovitch again turned the book over in his hands, and glanced from under his brows at his brother. Both were silent.

'Oh, by the way,' began Nikolai Petrovitch, obviously wishing to change the subject, 'I've got a letter from Kolyazin.'

'Yes. He has come to——to inspect the province. He's quite a bigwig now; and writes to me that, as a relation, he should like to see us again, and invites you and me and Arkady to the town.'

'Are you going?' asked Pavel Petrovitch.

'No, I shan't go either. Much object there would be in dragging oneself over forty miles on a wild-goose chase. Kolyazin wants to show himself in all his glory. Damn him! he will have the whole province doing him homage; he can get on without the likes of us. A grand dignity, indeed, a privy councillor! If I had stayed in the service, if I had drudged on in official harness, I should have been a general-adjutant by now. Besides, you and I are behind the times, you know.'

'Yes, brother; it's time, it seems, to order a coffin and cross one's arms on ones breast,' remarked Nikolai Petrovitch, with a sigh. 'We are old!'

Later that night, Nicolai went to his bed with Force and Matter in his hands. He had always loved his son did not want time to change his relationship with him. As he laid down, he flipped the pages of the book, and tried to make sense of a senseless thing.

Snippet from The Secret History