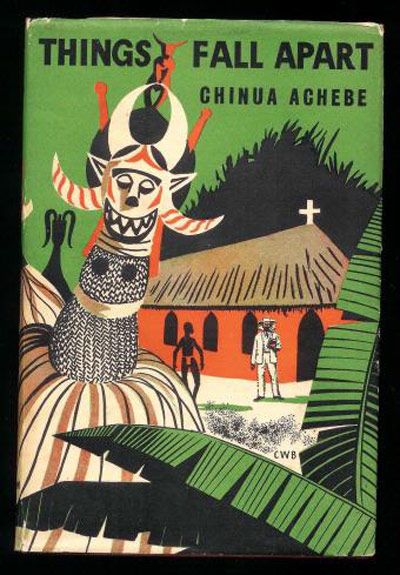 Context: This snippet presents some of the social evils of tribal culture in 19th century Africa. Ikemefuna, a boy who is given up to the Umuofia tribe as a sacrifice from a neighboring clan, is now to be slain. Lulled into a false sense of security, his murder takes on a dark and somber tone.

Okonkwo was selected by the elders of Umuofia to be the guardian of Ikemefuna, the boy taken as a peace settlement between Umuofia and another clan after Ikemefuna's father killed an Umuofian woman. The boy lived with Okonkwo's family and Okonkwo had grown fond of him, although Okonkwo didn’t show his fondness so as to not appear weak. The boy looked up to Okonkwo and considered him a second father. Okonkwo’s son, Nwoye had also grown fond of Ikemefuna.

One day, Okonkwo sat in his obi crunching happily with Ikemefuna and Nwoye, and drinking palm-wine copiously, when Ogbuefi Ezeudu came in. Ezeudu was the oldest man in this quarter of Umuofia. He had been a great and fearless warrior in his time, and was now accorded great respect in all the clan. He refused to join in the meal, and asked Okonkwo to have a word with him outside. And so they walked out together, the old man supporting himself with his stick. When they were out of earshot, he said to Okonkwo: "That boy calls you father. Do not bear a hand in his death." Okonkwo was surprised, and was about to say something when the old man continued: "Yes, Umuofia has decided to kill him. The Oracle of the Hills and the Caves has pronounced it. They will take him outside Umuofia as is the custom, and kill him there. But I want you to have nothing to do with it. He calls you his father."

The next day a group of elders from all the nine villages of Umuofia came to Okonkwo's house early in the morning, and before they began to speak in low tones Nwoye and Ikemefuna were sent out. They did not stay very long, but when they went away Okonkwo sat still for a very long time supporting his chin in his palms. Later in the day he called Ikemefuna and told him that he was to be taken home the next day. Nwoye overheard it and burst into tears, whereupon his father beat him heavily. As for Ikemefuna, he was at a loss. His own home had gradually become very faint and distant. He still missed his mother and his sister and would be very glad to see them. But somehow he knew he was not going to see them. He remembered once when men had talked in low tones with his father, and it seemed now as if it was happening all over again.

Later, Nwoye went to his mother's hut and told her that Ikemefuna was going home. She immediately dropped her pestle with which she was grinding pepper, folded her arms across her breast and sighed, "Poor child."

The next day, the men returned with a pot of wine. They were all fully dressed as if they were going to a big clan meeting or to pay a visit to a neighbouring village. They passed their cloths under the right arm-pit, and hung their goatskin bags and sheathed machetes over their left shoulders. Okonkwo got ready quickly and the party set out with Ikemefuna carrying the pot of wine. A deathly silence descended on Okonkwo's compound. Even the very little children seemed to know. Throughout that day Nwoye sat in his mother's hut and tears stood in his eyes.

At the beginning of their journey the men of Umuofia talked and laughed about the locusts, about their women, and about some effeminate men who had refused to come with them. But as they drew near to the outskirts of Umuofia silence fell upon them too.

The sun rose slowly to the centre of the sky, and the dry, sandy footway began to throw up the heat that lay buried in it. Some birds chirruped in the forests around. The men trod dry leaves on the sand. All else was silent. Then from the distance came the faint beating of the ekwe. It rose and faded with the wind--a peaceful dance from a distant clan.

"It is an ozo dance," the men said among themselves. But no one was sure where it was coming from. Some said Ezimili, others Abame or Aninta. They argued for a short while and fell into silence again, and the elusive dance rose and fell with the wind. Somewhere a man was taking one of the titles of his clan, with music and dancing and a great feast.

The footway had now become a narrow line in the heart of the forest. The short trees and sparse undergrowth which surrounded the men's village began to give way to giant trees and climbers which perhaps had stood from the beginning of things, untouched by the axe and the bush-fire. The sun breaking through their leaves and branches threw a pattern of light and shade on the sandy footway.

Ikemefuna heard a whisper close behind him and turned round sharply. The man who had whispered now called out aloud, urging the others to hurry up.

"We still have a long way to go," he said. Then he and another man went before Ikemefuna and set a faster pace.

Thus the men of Umuofia pursued their way, armed with sheathed machetes, and Ikemefuna, carrying a pot of palm-wine on his head, walked in their midst. Although he had felt uneasy at first, he was not afraid now. Okonkwo walked behind him. He could hardly imagine that Okonkwo was not his real father. He had never been fond of his real father, and at the end of three years he had become very distant indeed. But his mother and his three-year-old sister... of course she would not be three now, but six. Would he recognise her now? She must have grown quite big. How his mother would weep for joy, and thank Okonkwo for having looked after him so well and for bringing him back. She would want to hear everything that had happened to him in all these years. Could he remember them all? He would tell her about Nwoye and his mother, and about the locusts... Then quite suddenly a thought came upon him. His mother might be dead. He tried in vain to force the thought out of his mind. Then he tried to settle the matter the way he used to settle such matters when he was a little boy. He still remembered the song: Eze elina, elina!

He sang it in his mind, and walked to its beat. If the song ended on his right foot, his mother was alive. If it ended on his left, she was dead. No, not dead, but ill. It ended on the right. She was alive and well. He sang the song again, and it ended on the left. But the second time did not count. The first voice gets to Chukwu, or God's house. That was a favourite saying of children. Ikemefuna felt like a child once more. It must be the thought of going home to his mother.

One of the men behind him cleared his throat. Ikemefuna looked back, and the man growled at him to go on and not stand looking back. The way he said it sent cold fear down Ikemefuna's back. His hands trembled vaguely on the black pot he carried. Why had Okonkwo withdrawn to the rear? Ikemefuna felt his legs melting under him. And he was afraid to look back.

As the man who had cleared his throat drew up and raised his machete, Okonkwo looked away. He heard the blow. The pot fell and broke in the sand. He heard Ikemefuna cry, "My father, they have killed me!" as he ran towards him. Dazed with fear, Okonkwo drew his machete and cut him down. He was afraid of being thought weak.

As soon as his father walked in, that night, Nwoye knew that Ikemefuna had been killed, and something seemed to give way inside him, like the snapping of a tightened bow. He did not cry. He just hung limp. He had had the same kind of feeling not long ago, during the last harvest season. Every child loved the harvest season. Those who were big enough to carry even a few yams in a tiny basket went with grown-ups to the farm. And if they could not help in digging up the yams, they could gather firewood together for roasting the ones that would be eaten there on the farm. This roasted yam soaked in red palm-oil and eaten in the open farm was sweeter than any meal at home. It was after such a day at the farm during the last harvest that Nwoye had felt for the first time a snapping inside him like the one he now felt. They were returning home with baskets of yams from a distant farm across the stream when they heard the voice of an infant crying in the thick forest. A sudden hush had fallen on the women, who had been talking, and they had quickened their steps. Nwoye had heard that twins were put in earthenware pots and thrown away in the forest, but he had never yet come across them. A vague chill had descended on him and his head had seemed to swell, like a solitary walker at night who passes an evil spirit on the way. Then something had given way inside him. It descended on him again, this feeling, when his father walked in that night after killing Ikemefuna.

Snippet from The Girl on the Train

Snippet from Chronicle of a Death Foretold