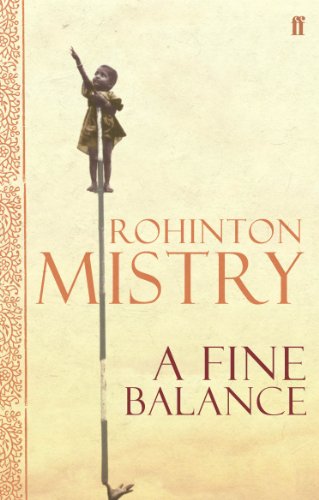 Context: This snippet explores the tenuous working relationship between a middle class employer and lower caste employees. In 1970s Bombay, Dina Dalal has a small tailoring business. She has sympathy for her poor(er) employees, the Darjis, but at the same time strives to be strict with them if they are not up to the mark - striking a fine balance.

Sometime after her husband passed away, Dina Dalal started her own small tailoring business. She was dependent on her employees who she could only pay very low wages. The employees were Ishvar Darji and his nephew Omprakash Darji who belonged to the Chamaar caste and generally seemed happy with the job. However, more people like her were coming to Bombay and in need of laborers. She was worried that she might lose the Darjis to someone else.

The Darjis lived far, at the mercy of the railways. Still, Dina worried now if they were late, certain she had been deserted for better-paying jobs. And since she could not afford to let them suspect her fears, she always masked her relief upon their arrival with a show of displeasure.

A day before the due date, they did not come till ten o’clock. “There was an accident, train was delayed,” explained Ishvar. “Some poor fellow dead on the tracks again.”

The empty-stomach smell floating out their mouths, like a cocoon containing words, was unpleasant. She was not interested in their excuses. The sooner they were at their sewing-machines the better.

But silence on her part could be misconstrued as weakness, so she said, drily, “Under the Emergency, government says railway runs on time. Strange that your train keeps coming late.”

“If government kept their promises, the gods would come down to garland them,” said Ishvar, laughing with a placating circular nod.

His peace-offering amused her. She smiled, and he was relieved. As far as he was concerned, jeopardizing the steady income would be foolish – Omprakash and he were very fortunate to be working for Dina Dalai.

They pulled out their wooden stools, loaded fresh bobbins, and started to sew while the sky prepared to rain. The gloom of grey clouds infiltrated the back room. Omprakash hinted that the forty-watt bulb was too dim.

“If I exceed the monthly quota, my meter will be disconnected,” she said. “Then we will be in total darkness.”

Ishvar suggested moving the Singer sewing machines to the front room which was much brighter.

“Not possible. The machines will be seen from the street, and the landlord will make trouble. It is against the law to have a factory in the flat, even if it is only two sewing-machines. Already he harasses me for other reasons.”

This the tailors understood. They too knew about landlords and harassment. Through the morning they worked steadily, with rumbling bellies, anticipating the midday break. They had eaten nothing since waking.

“Double tea for me today,” said Omprakash. “And a butter-bun to dip.”

“Pay attention to your machine,” said Ishvar. “You will end up with double fingers instead of double tea.” They both kept checking the clock. At the hour of deliverance, their feet left the treadles and sought out their sandals.

“Don’t go now,” said Dina. “This job is urgent, and you were late this morning. The manager will be very angry if the dresses are delayed.” She was worried about the due date – what if they came late again tomorrow? Be firm, be strict, she reminded herself.

Ishvar hesitated; his nephew would not take the suggestion kindly. His inquiring glance confirmed it, colliding with an angry glare.

“Your nephew is always hungry,” she said to Ishvar. “Has he got worms?”

Dina was not convinced. The suspicion had crawled into her mind during the first week. Apart from Omprakash’s skinniness and his constant complaints about headaches and hunger, she frequently spied his fingers relieving an itch in his fundament; and that, she felt, was evidence as conclusive as any.

“You should take him to doctor for checkup. He is so thin – a walking advertisement for Wimco Matches.”

“No no, he is all right. And who has money for doctor?”

“Work hard and there will be plenty. Finish this job quickly,” she coaxed. “The sooner I deliver it, the sooner you have your money.”

“Your five always become thirty-five. Listen, I will make tea for you later. Special deluxe tea, not the overbrewed, bitter poison you get at the corner. But first finish the work. That way, everybody will be happy – you, me, the manager.”

“Okay,” Ishvar gave in, shaking off his sandals and resuming his place. The cast-iron treadle, warmed all morning by his feet, had not had time to cool.

With the two Singers racing again, Omprakash’s angry whispers darted their way through the hammering needles to his uncle’s ear. “You always let her bully us. I don’t know what the matter is with you. Let me do the talking from now on.”

Ishvar nodded mollifyingly. It embarrassed him to argue with Om or scold him within Dina’s earshot.

At two o’clock, when the noise of the machines was making her temples throb, Dina decided to deliver what had been completed. She was annoyed with herself. Pleading and bribing with tea was not a good example of a strict boss. It would take more practice, she concluded, to get used to bullying them.

Snippet from Chronicle of a Death Foretold

Snippet from The Song of Achilles