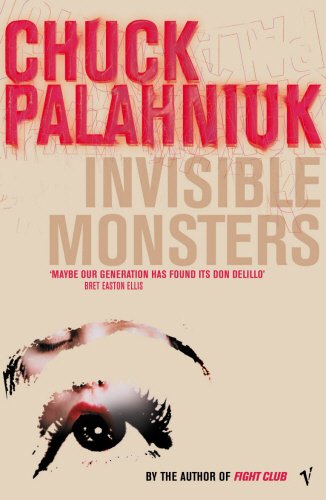 Gunshot to the Face: A Fashion Model's Story

Context: I had a great fashion career until an accident disfigured my face. I recently found a new friend in Brandy, a trans woman, who's about to start her own new life.

Until I met Brandy, all I wanted was for somebody to ask me what happened to my face.

I wanted to tell them. Birds ate my face. But nobody wanted to know.

Then nobody doesn't include Brandy Alexander.

Just don't think this was a big coincidence. We had to meet, Brandy and me. We had so many things in common. We had close to everything in common. Besides, it happens fast for some people and slow for some, accidents or gravity, but we all end up mutilated. Most women know this feeling of being more and more invisible everyday. Brandy was in the hospital for months and months, and so was I, and there's only so many hospitals where you can go for major cosmetic surgery.

Jump back to the nuns.

The nuns were the worst about always pushing, the nuns who were nurses. One nun would tell me about some patient on a different floor who was funny and charming. He was a lawyer and could do magic tricks with just his hands and a paper napkin. This day nurse was the kind of nun who wore a white nursing version of her regular nun uniform, and she'd told this lawyer all about me. This was Sister Katherine. She told him I was funny and bright, and she said how sweet it would be if the two of us could meet and fall madly in love. Those were her words. Halfway down the bridge of her nose, she'd look at me through wire-framed glasses, their lenses long and squared the way microscope slides look. Little broken veins kept the end of her nose red. Rosacea, she called this. It would be easier to see her living in a gingerbread house than a convent. Married to Santa Claus instead of God. The starched apron she wore over her habit was so glaring white that when I'd first arrived, fresh from my big car accident, I remembered how all the stains from my blood looked black.

They gave me a pen and paper so I could communicate. They wrapped my head in dressings, yards of tight gauze holding wads of cotton in place, metal butterfly sutures gripping all over so I wouldn't unravel. They fingered on a thick layer of antibiotic gel, claustrophobic and toxic under the wads of cotton. My hair they pulled back, forgotten and hot under the gauze where I couldn't get at it. The invisible woman.

When Sister Katherine mentioned this other patient, I wondered if maybe I'd seen him around, her lawyer, the cute, funny magician.

On the pad of paper, I wrote: still?

"Since his little mishap," she said and smiled with her eyebrows arched and all her chins tucked down against her neck. "He wasn't wearing his seatbelt."

She said, "His car rolled right over the top of him."

She said, "That's why he'd be so perfect for you."

Early on, while I was still sedated, somebody had taken the mirror out of my bathroom. The nurses seemed to steer me away from polished anything the way they kept the suicides away from knives. The drunks away from drinks. The closest I had to a mirror was the television, and it only showed how I used to look. If I asked to see the police photos from the accident, the day nurse would tell me, "No." They kept the photos in a file at the nursing station, and it seemed anybody could ask to see them except me.

This nurse, she'd say, "The doctor thinks you've suffered enough for the time being." This same day nurse tried to fix me up with an accountant whose hair and ears were burned off in a propane blunder. She introduced me to a graduate student who'd lost his throat and sinuses to a touch of cancer. A window washer after his three-story tumble head first onto concrete. Those were all her words, blunder, touch, tumble. The lawyer's mishap. My big accident.

Sister Katherine would be there to check my vital signs every six hours. To check my pulse against the sweep second hand on her man's wristwatch, thick and silver. To wrap the blood pressure cuff around my arm. To check my temperature, she'd push some kind of electric gun in my ear. Sister Katherine was the kind of nun who wears a wedding ring.

And married people always think love is the answer.

Jump back to the day of my big accident, when everybody was so considerate. The people, the folks who let me go ahead of them in the emergency room. What the police insisted. I mean, they gave me this hospital sheet with "Property of La Paloma Memorial Hospital" printed along the edge in indelible blue. First they gave me morphine, intravenously. Then they propped me up on a gurney. I don't remember much of this, but the day nurse told me about the police photos. In the pictures, these big eight-by-ten glossies as nice as anything in my portfolio. Black and white, the nurse said. But in these eight-by-tens I'm sitting up on a gurney with my back against the emergency room wall. The attending nurse spent ten minutes cutting my dress off with those tiny operating room manicure scissors. The cutting, I remember. It was my cotton crepe sundress from Espre. I remember that when I ordered this dress from the catalogue I almost ordered two, they're so comfortable, loose with the breeze trying to get inside the arm holes and lift the hem up around your waist. Then you'd sweat if there wasn't a breeze, and the cotton crepe stuck on you like eleven herbs and spices, only on you the dress was almost transparent.

You'd walk onto a patio, it was a great feeling, a million spotlights picking you out of the crowd, or walk into a restaurant when outside it was ninety degrees, and everyone would turn and look as if you'd just been awarded some major distinguished award for a major lifetime achievement. That's how it felt. I can remember this kind of attention. It always felt ninety degrees hot.

And I remember my underwear.

Sorry, Mom, sorry, God, but I was wearing just this little patch up front with an elastic string waist and just one string running down the crack and back around to the bottom of the patch up front. Flesh-tone. That one string, the one down the crack, butt floss is what everybody calls that string. I wore the patch underwear because of when the cotton crepe sundress goes almost transparent. You just don't plan on ending up in the emergency room with your dress cut off and detectives taking your picture, propped up on a gurney with a morphine drip in one arm and a Franciscan nun screaming in one ear.

No, really, it was funnier than it sounds.

It got funny when there I was sprawled on this gurney, this anatomically correct rag doll with nothing but this little patch on and my face was the way it is now. The police, they had the nun hold this sheet up over my breasts. It's so they can take pictures of my face, but the detectives are so embarrassed for me, being sprawled there topless.

Jump to when they refuse to show me the pictures, one of the detectives says that if the bullet had been two inches higher, I'd be dead.

I couldn't see their point.

A daring satire on beauty and the fashion industry, Invisible Monsters follows a fashion-model protagonist who has it all-boyfriend, career, loyal best friend-until an accident destroys her face, her ability to speak, and her self-esteem. Enter Brandy Alexander, Queen Supreme, one operation away from becoming a real woman, who will teach her that reinventing yourself means erasing your past and making up something better.

Chuck's unique and humorously lacerating prose and the thunderous climax scene make this novel one of his best.

Snippet from A Manual for Cleaning Women