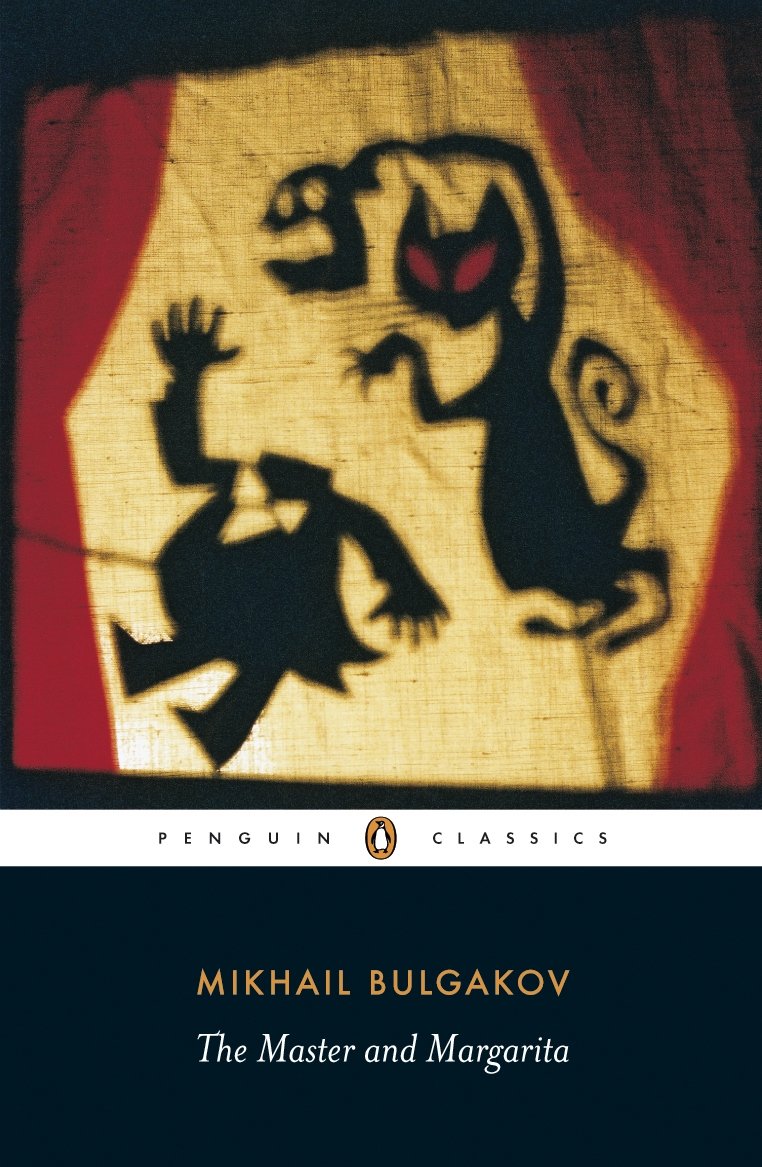 Soviet Society and the Satan

The Master and Margarita

Context: Ivan Nikolayich, an aspiring, young poet, witnessed the death of the head of the literary elite in Russia. It appears that Satan - disguised as a professor - caused this death. Ivan seems to have gone almost mad and has been put in a mental clinic.

At half past one in the morning a man with a pointed beard and wearing a white overall entered the reception hall of a famous psychiatric clinic recently completed in the suburbs of Moscow. Three orderlies and the poet Ryukhin stood nervously watching Ivan Nikolayich as he sat on a divan. The dish-cloths that had been used to pinion Ivan Nikolayich now lay in a heap on the same divan, leaving his arms and legs free.

As the man came in Ryukhin turned pale, coughed and said timidly:

The doctor bowed to Ryukhin but looked at Ivan Nikolayich, who was sitting completely immobile and scowling furiously. He did not even move when the doctor appeared.

'This, doctor,' began Ryukhin in a mysterious whisper, glancing anxiously at Ivan Nikolayich, ' is the famous poet Ivan Bezdomny. We're afraid he may have D.Ts.'

'Has he been drinking heavily? ' enquired the doctor through clenched teeth.

'Has he been trying to catch spiders, rats, little devils or dogs? '

'No,' replied Ryukhin, shuddering. ' I saw him yesterday and this morning ... he was perfectly well then.'

'Why is he in his underpants? Did you have to pull him out of bed?'

'Aha, aha,' said the doctor in a tone of great satisfaction. ' And why the scratches? Has he been fighting? '

Ryukhin was so embarrassed that he dared not raise his eyes. The courteous doctor, however, showed no signs of offence and with a practiced gesture took off his spectacles, lifted the skirt of his overall, put them in his hip pocket and then asked Ivan:

'Go to hell! ' shouted Ivan rudely and turned away.

'Why are you being so disagreeable? Have I said anything to upset you?'

'I'm twenty-three,' said Ivan excitedly, ' and I'm going to lodge a complaint against all of you--and you in particular, you louse! ' He spat at Ryukhin.

'What will your complaint be? '

'That you arrested me, a perfectly healthy man, and forcibly dragged me off to the madhouse! ' answered Ivan in fury.

At this Ryukhin took a close look at Ivan and felt a chill down his spine : there was not a trace of insanity in the man's eyes. They had been slightly clouded at Griboyedov, but now they were as clear as before.

'Godfathers! ' thought Ryukhin in terror. ' He really is perfectly normal! What a ghastly business! Why have we brought him here? There's nothing the matter with him except a few scratches on his face . . .'

'You are not,' said the doctor calmly, sitting down on a stool on a single chromium-plated stalk, ' in a madhouse but in a clinic, where nobody is going to keep you if it isn't necessary.'

Ivan gave him a suspicious scowl, but muttered :

'Thank God for that! At last I've found one normal person among all these idiots and the worst idiot of the lot is that incompetent fraud Sasha!'

'Who is this incompetent Sasha? ' enquired the doctor.

'That's him, Ryukhin,' replied Ivan, jabbing a dirty finger in Ryukhin's direction, who spluttered in protest.

'That's all the thanks I get,' he thought bitterly, ' for showing him some sympathy! What a miserable swine he is! '

'A typical kulak mentality,' said Ivan Nikolayich, who obviously felt a sudden urge to attack Ryukhin. ' And what's more he's a kulak masquerading as a proletarian. Look at his mean face and compare it with all that pompous verse he writes for May Day ... all that stuff about "onwards and upwards" and "banners waving! If you could look inside him and see what he's thinking you'd be sickened! ' And Ivan Nikolayich gave a hoot of malicious laughter.

Ryukhin, breathing heavily, turned red. There was only one thought in his mind--that he had nourished a serpent in his bosom, that he had tried to help someone who when it came to the pinch had treacherously rounded on him. The worst of it was that he could not answer back--one mustn't swear at a lunatic!

'Exactly why have they brought you here? ' asked the doctor, who had listened to Bezdomny's outburst with great attention.

'God knows, the blockheads! They grabbed me, tied me up with some filthy rags and dumped me in a lorry!'

'May I ask why you came into the restaurant in nothing but your underwear?'

'There's nothing odd about it,' answered Ivan. ' I went for a swim in the Moscow River and someone pinched my clothes and left me this junk instead! I couldn't walk round Moscow naked, could I? I had to put on what there was, because I was in a hurry to get to the Griboyedov restaurant.'

The doctor glanced questioningly at Ryukhin, who mumbled sulkily:

'Yes, that's the name of the restaurant.'

'Aha,' said the doctor, ' but why were you in such a hurry? Did you have an appointment there? '

'I had to catch the professor,' replied Ivan Nikolayich, glancing nervously round.

'Do you know Berlioz? ' asked Ivan with a meaning look.

Ivan looked puzzled. ' What composer? Oh, yes . . . no, no. The composer just happens to have the same name as Misha Berlioz.'

Ryukhin was still feeling too offended to speak, but he had to explain:

'Berlioz, the chairman of MASSOLIT, was run over by a tram this evening at Patriarch's.'

'Don't lie, you--you don't know anything about it,' Ivan burst out at Ryukhin. ' I was there, not you! He made him fall under that tram on purpose! '

'What are you talking about?' exclaimed Ivan, irritated by his listener's failure to grasp the situation. ' He didn't have to push him! He can do things you'd never believe! He knew in advance that Berlioz was going to fall under a tram! '

'Did anybody see this professor apart from you? '

'No, that's the trouble. Only Berlioz and myself.'

'I see. What steps did you take to arrest this murderer?' At this point the doctor turned and threw a glance at a woman in a white overall sitting behind a desk.

'This one? ' asked the doctor, pointing to a broken candle lying on the desk beside the ikon.

The orderlies stretched their hands down their trouser-seams and stared even harder at Ivan.

'Yes,' went on Ivan. ' He's in league with them. There's no arguing about it. He once talked to Pontius Pilate. It's no good looking at me like that, I'm telling you the truth! He saw it all --the balcony, the palm trees. He was actually with Pontius Pilate, I'll swear it.'

'Oh, my God! ' exclaimed Ivan and rose from the divan. ' It's two o'clock and here am I wasting time talking to you! Would you mind--where's the telephone? '

'Show him the telephone,' the doctor said to the orderlies.

As Ivan grasped the receiver the woman quietly asked Ryukhin:

'Police? ' shouted Ivan into the mouthpiece. ' Police? Is that the duty officer? Sergeant, please arrange to send five motor cycles with sidecars, armed with machine-guns to arrest the foreign professor. What? Take me with you, I'll show you where to go. . . . This is Bezdomny, I'm a poet, and I'm speaking from the lunatic asylum. . . . What's your address? '

Bezdomny whispered to the doctor, covering the mouthpiece with his palm, and then yelled back into the receiver: ' Are you listening? Hullo! ..Fools!'

Ivan suddenly roared, hurling the receiver at the wall.

One spring afternoon, the Devil, trailing fire and chaos in his wake, weaves himself out of the shadows and into Moscow. Mikhail Bulgakov's fantastical, funny, and devastating satire of Soviet life combines two distinct yet interwoven parts, one set in contemporary Moscow, the other in ancient Jerusalem, each brimming with historical, imaginary, frightful, and wonderful characters.

A revolutionary book, The Master and Margarita became a literary phenomenon, signalling artistic and spiritual freedom for Russians everywhere.

Snippet from The Song of Achilles

Life in a Jamaican Ghetto

Snippet from A Brief History of Seven Killings