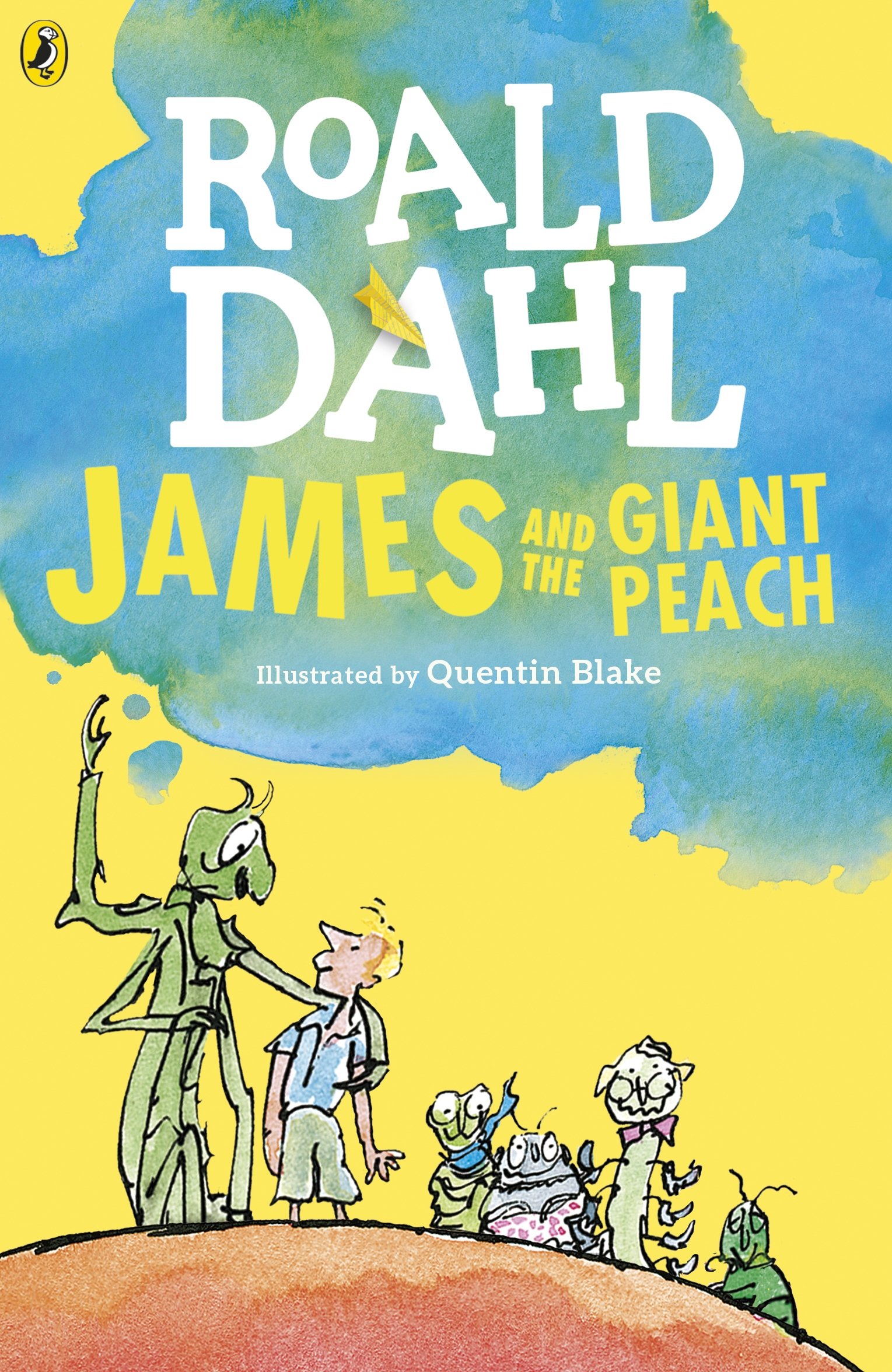 James and the Giant Peach


Poor James was still slaving away at the chopping-block. The heat was terrible. He was sweating all over. His arm was aching. The chopper was a large blunt thing far too heavy for a small boy to use. And as he worked, James began thinking about all the other children in the world and what they might be doing at this moment.

Some would be riding tricycles in their gardens. Some would be walking in cool woods and picking bunches of wild flowers. And all the little friends whom he used to know would be down by the seaside, playing in the wet sand and splashing around in the water. . .

Great tears began oozing out of James's eyes and rolling down his cheeks. He stopped working and leaned against the chopping-block, overwhelmed by his own unhappiness.

"What's the matter with you?"Aunt Spiker screeched, glaring at him over the top of her steel spectacles. James began to cry.

"Stop that immediately and get on with your work, you nasty little beast!" Aunt Sponge ordered.

"Beat him!" cried Aunt Sponge. "I certainly will!" Aunt Spiker snapped. She glared at James, and James looked back at her with large frightened eyes.

"I shall beat you later on in the day when I don't feel so hot," she said. "And now get out of my sight, you disgusting little worm, and give me some peace!"

James turned and ran. He ran off as fast as he could to the far end of the garden and hid himself behind that clump of dirty old laurel bushes that we mentioned earlier on. Then he covered his face with his hands and began to cry and cry.

It was at this point that the first thing of all, the rather peculiar thing that led to so many other much more peculiar things, happened to him.

For suddenly, just behind him, James heard a rustling of leaves, and he turned around and saw an old man in a crazy dark-green suit emerging from the bushes. He was a very small old man, but he had a huge bald head and a face that was covered all over with bristly black whiskers. He stopped when he was about three yards away, and he stood there leaning on his stick and staring hard at James.

When he spoke, his voice was very slow and creaky. "Come closer to me, little boy," he said, beckoning to James with a finger. "Come right up close to me and I will show you something wonderful."

James was too frightened to move.

The old man hobbled a step or two nearer, and then he put a hand into the pocket of his jacket and took out a small white paper bag.

"You see this?" he whispered, waving the bag gently to and fro in front of James's face. "You know what this is, my dear? You know what's inside this little bag?"

Then he came nearer still, leaning forward and pushing his face so close to James that James could feel breath blowing on his cheeks. The breath smelled musty and stale and slightly mildewed, like air in an old cellar.

"Take a look, my dear," he said, opening the bag and tilting it toward James. Inside it, James could see a mass of tiny green things that looked like little stones or crystals, each one about the size of a grain of rice. They were extraordinarily beautiful, and there was a strange brightness about them, a sort of luminous quality that made them glow and sparkle in the most wonderful way.

James stared into the bag, and sure enough there was a faint rustling sound coming up from inside it, and then he noticed that all the thousands of little green things were slowly, very very slowly stirring about and moving over each other as though they were alive.

"There's more power and magic in those things in there than in all the rest of the world put together," the old man said softly.

"But -- but -- what are they?" James murmured, finding his voice at last. "Where do they come from?"

"Ah-ha," the old man whispered. "You'd never guess that!" He was crouching a little now and pushing his face still closer and closer to James until the tip of his long nose was actually touching the skin on James's forehead. Then suddenly he jumped back and began waving his stick madly in the air.

"Crocodile tongues!" he cried. "One thousand long slimy crocodile tongues boiled up in the skull of a dead witch for twenty days and nights with the eyeballs of a lizard! Add the fingers of a young monkey, the gizzard of a pig, the beak of a green parrot, the juice of a porcupine, and three spoonfuls of sugar. Stew for another week, and then let the moon do the rest!"

All at once, he pushed the white paper bag into James's hands, and said, "Here! You take it! It's yours!"

James Henry Trotter stood there clutching the bag and staring at the old man.

"And now," the old man said, "all you've got to do is this. Take a large jug of water, and pour all the little green things into it. Then, very slowly, one by one, add ten hairs from your own head. That sets them off! It gets them going! In a couple of minutes the water will begin to froth and bubble furiously, and as soon as that happens you must quickly drink it all down, the whole jugful, in one gulp. And then, my dear, you will feel it churning and boiling in your stomach, and steam will start coming out of your mouth, and immediately after that, marvelous things will start happening to you, fabulous, unbelievable things -- and you will never be miserable again in your life. Because you are miserable, aren't you? You needn't tell me! I know all about it! Now, off you go and do exactly as I say. And don't whisper a word of this to those two horrible aunts of yours! Not a word! And don't let those green things in there get away from you either! Because if they do escape, then they will be working their magic upon somebody else instead of upon you ! And that isn't what you want at all, is it, my dear? Whoever they meet first, be it bug, insect, animal, or tree, that will be the one who gets the full power of their magic! So hold the bag tight! Don't tear the paper! Off you go! Hurry up! Don't wait! Now's the time! Hurry!"

With that, the old man turned away and disappeared into the bushes.

The next moment, James was running back toward the house as fast as he could go. He would do it all in the kitchen, he told himself -- if only he could get in there without Aunt Sponge and Aunt Spiker seeing him. He was terribly excited. He flew through the long grass and the stinging-nettles, not caring whether he got stung or not on his bare knees, and in the distance he could see Aunt Sponge and Aunt Spiker sitting in their chairs with their backs toward him. He swerved away from them so as to go around the other side of the house, but then suddenly, just as he was passing underneath the old peach tree that stood in the middle of the garden, his foot slipped and he fell flat on his face in the grass. The paper bag burst open as it hit the ground and the thousands of tiny green things were scattered in all directions.

James immediately picked himself up onto his hands and knees and started searching around for his precious treasures. But what was this? They were all sinking into the soil! He could actually see them wriggling and twisting as they burrowed their way downward into the hard earth, and at once he reached out a hand to pick some of them up before it was too late, but they disappeared right under his fingers. He went after some others, and the same thing happened! He began scrabbling around frantically in an effort to catch hold of those that were left, but they were too quick for him. Each time the tips of his fingers were just about to touch them, they vanished into the earth! And soon, in the space of only a few seconds, every single one of them had gone!

James felt like crying. He would never get them back now -- they were lost, lost, lost forever.

But where had they gone to? And why in the world had they been so eager to push down into the earth like that? What were they after? There was nothing down there. Nothing except the roots of the old peach tree. . . and a whole lot of earthworms and centipedes and insects living in the soil.

James Henry Trotter lives with two ghastly hags. Aunt Sponge is enormously fat with a face that looks boiled and Aunt Spiker is bony and screeching. He's very lonely until one day something peculiar happens. At the end of the garden a peach starts to grow and GROW AND GROW. Inside that peach are seven very unusual insects - all waiting to take James on a magical adventure.

As Fate Would Have It

Snippet from Fates and Furies